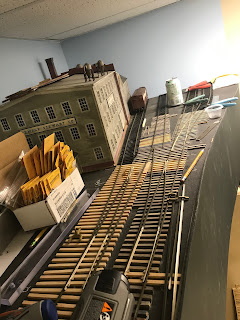 Okay, the ties are sanded, and I have assembled my supply of points and frogs next to the factory. That factory is a bit of a problem as it has a fire wall in the middle of the long wall that juts out and that is putting a little pressure on my first turnout placement. I have to have the track a little further from the wall than I figured initially. I am beginning to place my components and test for fits. The turnouts have to fit pretty close to plan as they flow from one directly into another and they are all co-dependent. You can also see my white pencil as I have been checking my frog locations. I found I had to shift to a No 7 frog on the last one to make it all come together. The team track, which are the last two tracks to the right of the soda can, has the No 5 turnout as it is in a short space. 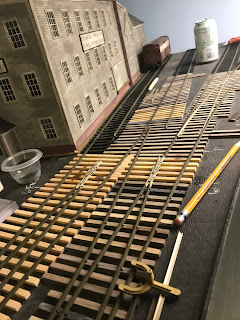 I am beginning to lay the turnouts. I use those Kemtron tack gauges as they allow you to spike around them., 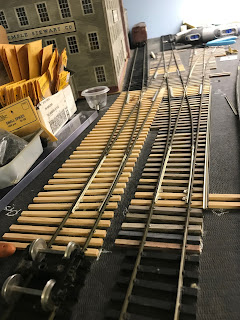 We are getting closer as the two leading turnouts are in. The points are not connected but they are tested with the truck that is in the foreground. It runs smoothly through them. I have gotten the track in next to the building with enough clearance for an engine. 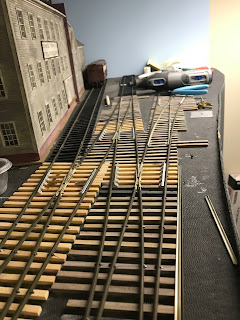 Okay, now all the turnouts are laid, and I have placed some pewter based guard rails at each frog. Everything runs smoothly and I now have to install the motors. 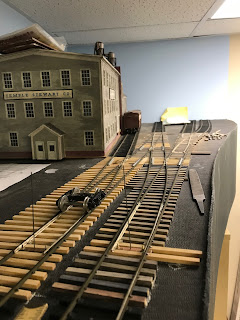 Motor linkages are sticking out of the point bars, and I now have to cut the spring wire to length 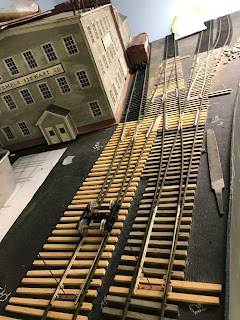 Here is a high level view of the installation. I am beginning to cut the ties to length. 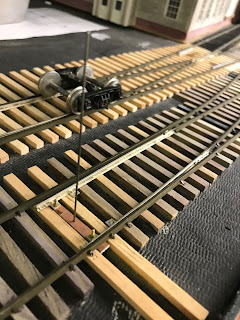 This is a close up of the point bar with the spring wire before trimming. I also cut the brass studs that the points are bolted to. 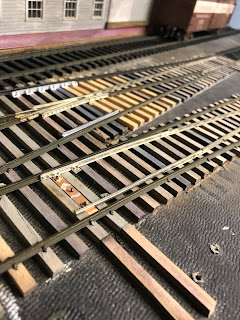 This is a completed turnout. Brass studs cut down, spring wire cut and a closer view of the pewter guard rails. These were made by Harry Roberts some years ago. I used up the last of what I had on this installation.
Next, we have to install the wiring to the track and the frog and then paint the track. Another week to go.
Posted by prr - nocentral at 4:16 PM